3 days of high culture – classical music and dance performances back to back, from accomplished artists. For those who lived near Malleshwaram or had the time or both, this was an opportunity not to be missed.
I live very far away from Malleshwaram, far for someone who commutes by public transport, but I had the time and of course, the interest.
I was perhaps one of the first ones to buy a ticket online, for the first day; I had to choose a day and it had to be the one, when Vidyabhushan of Udupi was performing.

Fortunately for me, the event started late and I reached just when Kadri Gopalanath had started playing the saxophone.

The saxophone, of all the instruments, is rarely played on the stage as far as I know.
I have not heard much of the saxophone, but what echoes in my ears, clear and loud, is the rendition of the song ‘Nanati Baduku’ in raga ‘Revathi’, my favourite of all ragas, many years ago, in my little village of a few hundred people, during the annual car festival of Lord Venkateshwara, as we walked behind the procession or Utsava of a deity alongside the artists who played the saxophone, all of us barefeet. Was it kadri Goaplanath then? I don’t remember.

I entered Chowdiah already in love with the Saxophone, hoping I would get to hear ‘Revathi’ again.

I am not qualified to be a critic hence won’t say much. There are a few pictures and a few points...

Revathi was not played, but there was ‘Hamsadhwani’ as I entered, followed by other pieces, familiar to me. There was a full-fledged ‘Bhajare Manasa’ in ‘Abheri’ and I enjoyed the short ones rendered after the felicitation. 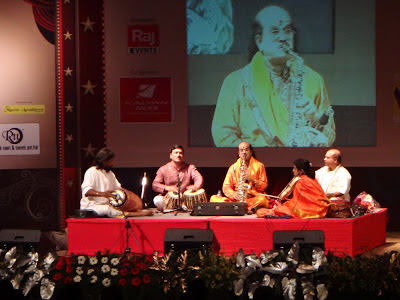 The Mridangam, allowed to perform solo and in Jugalbandi with the Tabla towards the end was a little too loud and aggressive I thought.

It had been a Friday and unfortunately, the hall was almost empty, with only the front rows occupied in addition to a few seats here and there.
There was moving camera that was an eyesore to the audience and must have been a distraction to the artists.
The Emcee (Monita Bala) was a misfit to the occasion and even offensive on account of a few points (more on this in the next post). We were lucky that the acclaimed Kadri Goplanath performed for us despite the above.

And yes, we must have more of Saxophone performances in the arena of classical music, for its sheer power, clarity and malleability.

Next, there was Bharatanatyam performance by two dancers accompanied on certain pieces by other artists.
If I know a little bit about music, I know even less of dance.
The piece on ‘Navarasas’ interested me. Shringara, Hasya, Roudra, Bheebhatsa, Shanta, Karuna,... 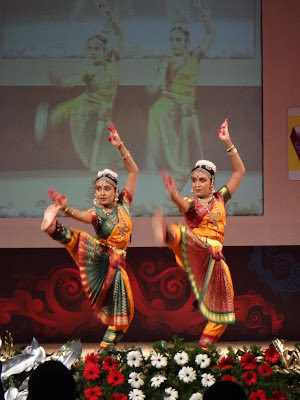 The two main artists could have been more synchronized in their steps. I could also see that when they performed as a group, one of the artists, now and then looked at the other dancers to be sure of her step.
But it’s alright, dances, especially group dances are a delight, what with their colourful costumes and their chiming anklets. 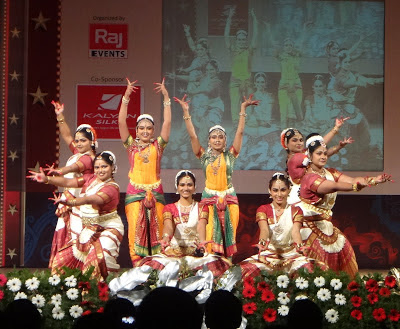 After lunch break, we had Vidyabhushan with his troupe. 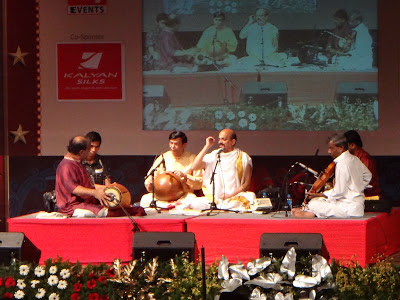 What a golden voice! How soulful!
His renditions are not strictly classical, but he sings with ‘Bhakti’, a devotion so total, that it cannot fail to invoke devotion in the listeners and take them closer to God.
Also it cannot fail to receive appreciation from the more puritan of classical musicians.
His ‘Pillangoviya Chela Krishnana’ is his most popular song. I was sure that he would sing it, but he had other songs for us.
When he stopped, I wished he would go on for another hour, even the whole day.

The camera was mounted on an even longer arm and had grown long and uglier.
Fortunately, we had a different Emcee for the noon (and evening) who spoke words not only appropriate for the occasion but also lyrical, musical and words that revealed talent.

The stage was now being prepared for Bharatanatyam by Vani Ganapathy.

I looked forward to her performance, for I had heard her name (who hasn’t?) but never seen her dance.
It was a long wait, almost an hour long, before the stage was prepared, the musicians took their positions and she appeared. Using a cassette would have been quicker but perhaps having musicians singing live had other advantages.
Whatever may be the case, waiting time should be minimal, for people start leaving the auditorium one by one and also it has a cascading effect on the next performance in the programme.
I had wanted to sit through Manjula Gururaj’s singing – the first few minutes, but had to leave, as it was getting late. 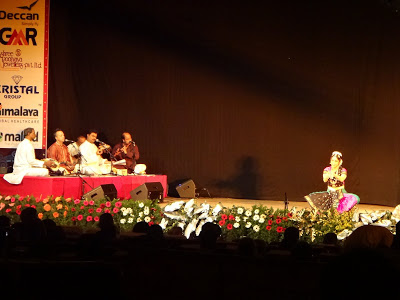 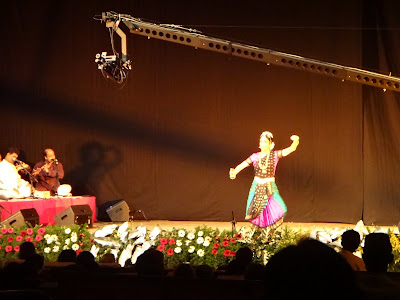 The first piece by Vani was Krishnashtakam. As I said before, I understand every little of dance, but there are sevaral things I really liked about Vani.

Soon after the first piece, she was at the mike, saying in very clear terms that the moving camera was a big distraction, that she had not been informed about it, that she would like the event team to stop the distraction at once. 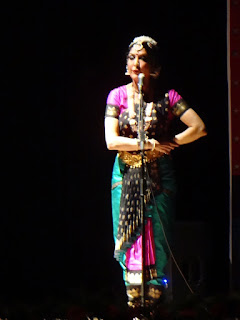 Assertiveness and self respect are impressive attributes.
The urban population which has very poor exposure to high culture needs to be taught how to treat classical artists – to give them due respect, to look up to them with humility, reverence and gratitude, to show sensitivity in maintaining an atmosphere conducive to performance of high art and not treat them like any other professionals who have been paid to perform a job.
The camera was not simply a technical point, but it showed an attitude of irreverence and insensitivity, not to mention ignorance of high arts and the decorum practised therein.

The audience, by now tired of the huge instrument flying all over, gave her a resounding ovation as if thanking her for voicing their own grievance.

But I wish she hadn’t forbidden us from using our cameras to take pictures or video recordings. All of us, having come so far, having braved Bangalore traffic, having sit patiently through performances we understood, liked and others that we didn’t, the least we can take back with us are a few pictures, a short video or two – as a memory, as a souvenir.
Asking us to be careful about the flash going off, that’s certainly agreeable, but to deny pictures?
Copyright is never a gracious thing, according to me.

Another thing I liked about her was her speaking to the audience in between pieces.
Apart from helping her achieving personal connect with the audience, it served a very important purpose. 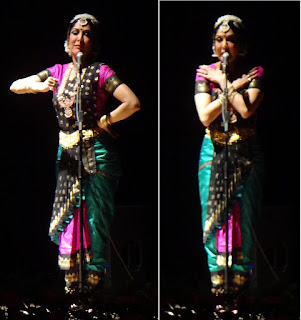 Most of the people, even those who understand classical music well, do not understand dance, the mudras and other nuances.
Vani, before every performance, stood before the mike, and explained with mudras what she would be depicting with her dance, where they had taken choreographical liberties, what the story was all about, how many characters there were etc. And this really helped us understand her dance and follow the story that was being told. 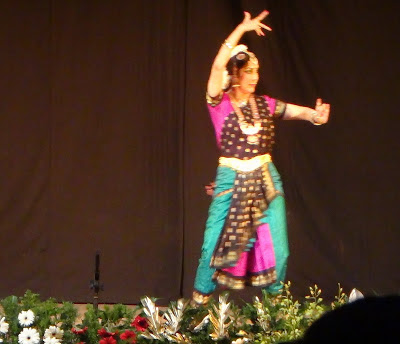 As far as I know, dancers usually do not explain their act to the audience and sometimes, throughout the performance, the audience (most of them) is clueless as to what they are witnessing.

It would be most helpful if every dancer, in the manner of Vani, helped the audience better appreciate their performance and their art.

The treatment of 'Aadisidal Yashode Jagadoddharana', a song in raga 'Kaapi' that all of us have heard, was interesting. The character of Purandaradasa was introduced in the performance, shown arriving at Yashoda's home, being amazed at how Yashoda had tied Krishna up and his asking Yashoda to release him.

It was time for me to leave and I walked to the bus stop, song in my heart and dance in my step.

It was a day well spent, a day of fulfillment and my gratitude to all the artists.

Posted by Sowmya Chakravarthy at 21:30

The funny thing is in an age of social networking, they should let people spread these kind of events by allowing them to photograph and even record..that way, the next show has more people showing up. Russel Peters wont be where he is if it wasn't for his youtube videos..good to know classical programmes like these still alive...Thanks for sharing..reminded me of my Mylapore days..

Thanks for the comments... Do come here more often da...

And why did you move to wordpress?

It is a pleasure to watch such live shows. Anytime better than the trash that we produce in the name of "movie"
There should be some sort of ban on these boom cameras. It takes away the ambiance and peace on a stage, and is a constant distraction to the performers.
Well written and well covered.