Gajanana Juice Centre. Sangam Circle, Jayanagar.
That’s the fruit juice shop I have been a regular customer of for the last 3 years or so. And what does one mean by regular? Different things. What I mean is, once a day almost every day.

Living all by myself in a small (but nice) place without an equipped kitchen does not inspire me to cook. And I do not believe it advisable to eat outside everyday – stale oil, soda, adulteration... Also since I want to use my time judiciously and pinch every waking minute possible to devote to reading and writing, I don’t want to spend time on exercising.

All these concerns make me gravitate to Gajanana Juice Centre, among other healthy food places in my vicinity.
My specifications are one hundred in number. Not that many literally, but them must seem to be so.
…No mixing fruit with milk, only with water - when there is pulp like apple, papaya.., and no water in case of orange, watermelon… no ice… and no sugar, never…
Yes, I am a customer who knows what I want. More importantly I am a customer who knows the difference between ‘what I want’ and ‘what is good for me’.

That doesn’t mean the boys there don’t like me. They are used to my regular visits and if I don’t turn up for a few days and visit them after a gap, they ask, ‘Where were you madam? You went to Mysore?’
Yes, I did, say I.

When I asked them (small boys in their teens, by the way), where they were from, where they lived and didn’t they go to school, they asked me too, where I was from. And I told them, Mysore. That’s why they like me. I talk to them.
In this super city, like all superstructures, characterized by estrangement and alienation, no one talks to them, no one asks them anything.
I talk to them. I question them. I scold them even. Why do you need fan in this weather, use dettol instead to keep flies away instead of fan,… what do they do with fruit waste – pulp, peel, seed, mash, oh a van comes every day to carry it to a cowshed and pays us for it, good… when the water melon is sweet during season, please don’t add sugar at all, for all customers… please buy good quality sweet oranges and hike the price by a rupee instead of buying those lemon sized fruit and adding half a jar of sugar to hide their sour truth…

And I know how to do my talking with small fellows without losing dignity. I only do my bit of educating and of course, asking them how they are and where they are from. No laughing, joking, over-familiarity nonsense.

When I first put the straw in my mouth – this was 2 or more years ago, it tasted bitter and then when I started drinking, the sweetness of the fruit prevailed upon the bitter taste of the straw.
When it happened again, I told him about it. He didn’t seem to heed me.

The next time I made a face, he opened a new packet of straws and gave me one. It was alright.

But of course I could not expect him to open a new straw packet every time I visited him.
Perhaps the straw packet that was open and exposed, gathered dust and hence tasted bitter. So I told him to buy a plastic jar and keep the straw inside the jar and close the lid.

But when I went next, the straws were lying exposed, as before.

I tried for a few days to drink from the cup directly without using straw.

One day I noticed how badly stained the boys’ hands were – perhaps it was the stain of pomegranate or black grapes or other fruit or a blend of them all. I pointed out to the boy who was handing the juice to customers as well as straw with the same hands. The boy somewhat embarrassed, said, it wasn’t dirt, just stain and it would not go.

Understandable.
But the boy giving out straw with the same hand with which he had just wiped the counter with a dirty looking rag? Not understandable. I asked him, he didn’t know what to say.

When he next reached for the straw packet, to offer me a straw, I stopped him with a gesture and asked me to hand me the packet, I would pick my straw myself. They smiled at one another. And each time they gave me the packet, they smiled. Perhaps, they think, ‘too much’.

What I saw next really exasperated me. The dirty rag was lying on the packet of straw, with one end of all straws covered by the rag, which had been carelessly thrown over the packet, after cleaning.

What is this, I asked him. He removed the rag at once and gave a new packet of straws.
I repeated. Please buy a plastic jar and keep the straw inside the jar and close the lid. Will you?

No. he wouldn’t. He just scratched his hair and smiled.

On my next visit, I took the packet, usually having only one corner torn open, reached for the straw that was unexposed, beneath the corner that was intact. And drank. But the straw did taste bitter.
I took another similar straw and looked inside the hollow. There were black particles; grit? mud? Perhaps soot from the vehicles on the main road…

So on the following visits, I would not just pick any unexposed straw but would pull aside a bunch of straws (without removing them from the packet), peep into the bunch, and pull out one straw that had minimum black dots inside it.

It would improve my immune system; one should not be so delicate…I consoled myself in many ways.

But last week, when I peeped through the straws, I saw all of them had gathered soot - all had blemishes on them and not one was innocent. That was the last straw, literally and idiomatically!
I complained to him aloud, asked him why he could not get a plastic box/jar and keep the straws inside. There happened to be other customers watching and just so that I would not be judged fussy or quirky in their eyes, I showed the straw packet to a woman standing beside and said, “How to drink juice from these straws?” in what must have been an exasperated tone.

The boy behind the counter said ‘ok mam’, but I knew nothing would change. Perhaps I should get myself a straw packet and carry one to the shop each time.
I was sick of the same problem at the cane juice shop. His shop was not as exposed to the main road as the fruit juice shop, and it was bit more sophisticated, just a bit.
There was a glass front and the straws were kept in a tumbler. But when I put them in my mouth, they tasted bitter too, although there was no grit inside, when I peeped in.

Once, in the cane juice shop too, I was about to begin...”Could you keep these inside a closed jar….’, but stopped myself. Enough…
I had already earned the title of ‘school teacher’ in my X office, for correcting people ‘s English grammatical mistakes… so forget it.

Then came a day. 11 October 2012.
I walked to the Gajanana fruit juice shop after a movie or something, hoping it would be open. It was open. There were a few customers.
And, there was a plastic jar. On the counter. With pink, green, blue, yellow straws in it.
I looked at the boy. He was already smiling. I smiled too. An approving, content, congratulatory smile. There was no need to say anything. What was going on in our minds, was understood. There was no need for words. We only smiled some more. God, I make it sound romantic! 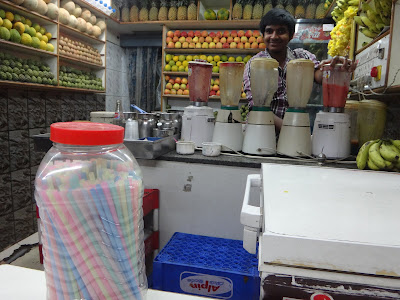 Two days have passed now. And the plastic jar is no big deal. We take it for granted. I, other customers, the boys in the shop themselves…
But the small change will be important to the shop; a step ahead.
Other shops too, hopefully, will be inspired to follow the ‘best practice’.

To me, who is usually considered ‘fussy’, ‘fastidious’, ‘quirky’, ‘teacher-like’ etc., by other people having the ‘chalega’, ‘adjust maadi’ ‘you can’t do anything’ attitude, this a small victory.

If hundreds of people, after this day, for generations to come, will get to drink fruit juice at this shop from clean, grit free, soot free, dust free straws, it will be thanks to the unrelenting persuasion of a woman who did not shy away from onlookers and who believed that she could, and (more importantly) SHE OUGHT to change what needed to be changed in our surroundings : ) 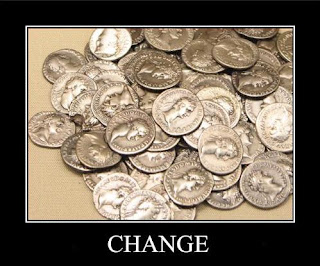 This post is a part of a series that I started sometime ago and forgot for a while. You may want to read the earlier posts in this series.

And truth be told, I can so imagine you giving your piece of mind to those boys at the shop...Tad irritating at times, but most of the times, its a lot of fun to watch you take people's cases and makes for interesting stories when I narrate the story later to other people about the relentless woman who got things done with sheer persuasion :)

mockery. even though within a compliment... trust you to do such things