When there were weeks left to my travel to Everest Base Camp of 2011, when I was still in Bangalore, I became careful about my movements to avoid any small or big accident. As the weeks turned into days, I began to take extra care while crossing the roads. I would cross one half of the road carefully, and while standing at the centre, waiting to cross the other half, I would be conscious of my precarious position, in spite of the road divider being solid mortar and I would to hope to get to the other end safely.
Even when I was crossing a one way, I would look to my left as well as my right.

Days later, as I walked the last 100 meters to the base camp, limbs trembling after days of continuous plodding, on a trail that was in certain places just two feet across, and made, not of solid earth but loose sand, pebbles, tiny pieces of rock and big wobbling stones, I was amazed at how much more precarious that situation was than all others I had been wary of while in the city and yet, how little precaution I took as I walked in abandon, unable to hold back, even as the stones crunched beneath my feet.

All it took was a loose stone. To slip beneath my feet. One stone among millions of stones.
But nothing happened.
All it took, to make me slip, stumble, and sprain my ankle or tear a muscle or bruise myself, to stop me dead, was one pebble among countless of them.
But nothing happened.
Every stone played its part well. Every grain of sand cooperated. Every wobbling rock took the responsibility to support my feet. Because it was in my destiny to get there.
It had been written before. And the writ would be honoured. By every stone and every pebble, every icicle and every snowflake.

To think, how every one of them, stone, sand, rock, pebble and ice, lying in heaps of loose soil, sliding day and night at the touch of whimsical wind, conspired to take position, as if by collective understanding, as if by a decree from the universe, and against all laws of probability, in order to take me where I was destined to go, it’s amazing! 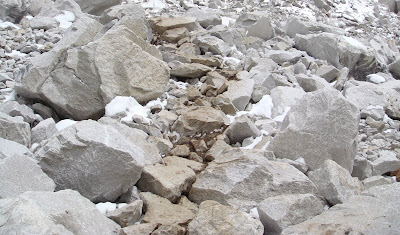 Posted by Sowmya Chakravarthy at 01:42