We have not yet forgotten how Jayalalitha troubled Vajpayee; how she threatened to withdraw support at the drop of a hat; compelling him to fulfil this demand and that.

We just heaved a sigh of relief that this time, Modi had a majority and this woman would be able to do nothing and just then...

She begins. On the very first day she is all set to cause trouble.

Not attending Modi’s swearing in ceremony? Really?
I hope Modi will not budge; I hope he will ignore her and set the right precedent.

I have always thought Tamilians to be so very much like Extremist Muslims.
Fanatic and having a limited Identity.

They do nothing to endear themselves to other people whether inside or outside their State...

People here have to learn Tamil in order to converse with their maid servants who will simply not learn Kannada.

Having been in IT for 9 years now, I have gotten used to their talking in Tamil in cubicles, cafeteria, even training rooms. The only thing they don't do in tamil is programming. As yet.

Karunanidhi who represents a large section of them attempted once to remove Sanskrit from the temples of the State and have all rituals performed in tamil only. ‘Let the Gods who do not understand tamil leave the State’, he had said, a few days before he was dragged away like a dog in the middle of the night to be thrown into a prison.

And they are obsessed with Rajnikanth... Yuck!
Comparing him with Amitabh Bachhan, trying to prove Rajni is more popular... how ridiculous is that! Comparing a versatile actor to a stuntman!
I was once surrounded by a bunch of them Tamils – I said I had never watched a Rajni movie and they wanted to revoke my citizenship, even take away my passport because I wasn’t Indian enough if I didn’t watch Rajni movies.
For the next few days that I was with them, they were carrying him like Vikram carrying ‘Betal’ on his back and thrusted him upon us, innocent unsuspecting people almost everyday.

They set that dacoit and butcher Veerappan upon us.

Over the Cauvery water dispute, they set the LTTE upon us – the LTTE threatened to blow up the KRS dam in Mysore if we didn’t release water to TN and for a few days, no one was allowed near the dam which had been until then open to all visitors all through the year.

Today, they are being a nuisance to Kerala objecting and preventing the reconstruction of the 116 year old Mullaperiyar dam on the Periyar river knowing that it is on the verge of a collapse, posing immense danger to millions of people living in the region.

Such a self centered people.

At one point in time, when Tamil population in Bangalore became a sizeable number, they went to the President of India demanding that Bangalore be declared a union territory and not part of Karnataka!
It was Vatal Nagaraj and other Kannada activists who protested severely and saved Bangalore.

Why, the LTTE killed a Prime Minister of India.

And Jayalalitha, Vaiko and other Tamils want India to distance itself from Srilanka for the sake of the 'sentiments' of these insensitive Tamilians who have never cared to get along even with their own fellow Indians?

I hope and pray they will be ignored by Modi. And the rest of us Indians.

By the way, this is a Tam Brahm writing all this – but then, the Tam Brahms belong to a different league altogether (most of the generalizations about tamils don't apply to them), especially those of us who had the good fortune not to be born or brought up in that INSULAR state.

Posted by Sowmya Chakravarthy at 00:51 9 comments:

It was 12 when I reached and the results were clear. BJP alone had 273+ at that time.
Arnab, Pradeep, Barkha, Pranoy – all of them were smiling and jumping and rushing through a gush of words in a high pitch which sounded the drumbeat in accompaniment to the rapture in my own heart.

I had reached just in time to see Modi touching his mother’s feet and have her smear the Tilak on his forehead. Surrounding them were a simple middle class family in a simple setting.

The thing which made it real and genuine most of all was this - her caressing hands had ruffled his hair; it remained like that for sometime, a moment of untidiness before the camera, before he smoothed it with his hand. And sat down to talk to mother... 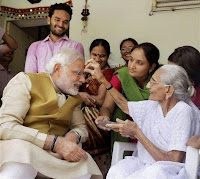 Power cut just when Sonia Gandhi was about to speak to the press.
The power cut must have been the intentional doing of the KEB which was still under a jealous Congress in the State. No jokes, they do that sometime.
When I finally saw that footage later, I was thinking, why is the idiot Rahul smiling? What is he so happy about?

I wrote on my FB wall before going to bed

The next morning.
What a Grand Convoy to Delhi!
What a welcome!
A machine to strew rose petals on his path all the way... Indeed?
Unprecedented celebrations...

The Accenture ad. Lotuses blooming here too.
This is unbelievable.
Is there anyone who is not celebrating?

Very happy to see the Indian map coloured saffron. Those blue grey blotches especially in TN, West Bengal and Kerala don’t look pretty at all...
I can’t forget that incident in Kerala when communists objected to the lighting of a lamp in an inaugural function stating it was a Hindu ritual, irrelevant in a secular State.
Kerala gave us Adi Shankaracharya – the one who saved Hinduism; we would have been a Buddhist country if not for him, Hinduism would have been wiped out...
Kerala gave us Swathi Thirunal – who gave Carnatic Classical Music 300 plus beautiful compositions in his short life of 31 years.
And today they object to the lighting of a lamp!

We have achieved our goal of ‘Congress Mukt Bharat’.
Our next goal should be 'Communism Mukt Bharat'. 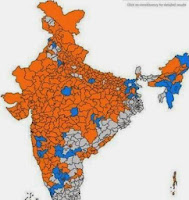 The beauty of having religion and spirituality in politics. Beautiful rituals in Vishwanath temple.
Lights, colour, flowers, lamps, prayers and gratitude on the banks of Ganges...

Would Congress ever celebrate this way? They would have slaughtered cows and pigs for a party and emptied bottles of liquor...
Also, would they have the guts to enter a temple and risk Muslim displeasure? They would have gone to some Durgah though!

For the first time it feels an Indian has become the PM of India.

What a difference it makes to choose a political party rooted in tradition and religion... 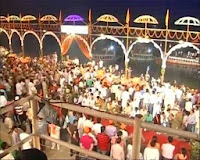 2)Now it all make sense. Rahul was talking RTI all the way - Return To Italy

Yesterday evening, after 6 years of living without it, I bought a Television. My first one. Samsung. LED. 23 inches. This evening, the technician mounted it on the wall. Looks beautiful now, black and glistening. Tomorrow, it will come to life with light and colors.