People we like most in life often prove to be an error of judgment.
If this is true for me alone, then it’s my luck.

But if you agree with me, even some of you, then it’s a pattern that calls for deep reflection.

Actually, there is no error of judgment, because there is no judgment to begin with.
Many a time, we don’t love people because of who they are. We choose to love them first and then attribute qualities to them that would make them worthy of our loving.

And then comes a jolt of reality like a quake and everything tumbles down. And we lament. In confusion - most of the time not sure whether it is the person who disappointed us that we are lamenting or our own judgment.

Whichever way, it does hurt a lot. When someone we have put on a pedestal falls down.

Posted by Sowmya Chakravarthy at 11:12 7 comments:


A new blue filigreed chubby-baby sized blue Krishna clad in yellow robes, flute in hand was the special feature of Janmashthami this year. And the tall brass Diyas; both from Guruvayur, where my parents visited as part of their yearly Tamil Nad temple tour. They had carried it on their lap all through the return journey.

The golden Krishna that we previously had, had faded, and eventually fallen into pieces from its niche when my mother’s elbow had touched it when she was passing it. I had suggested discarding it long ago. But they had clung to it, unwilling to let go.

Like all old things break, making way for the new, this one had made way for the new Krishna. The joy of the new Krishna, its colour, its flawless expression, the filigree, and its sheer size made all forget the old one and the pain of losing it.
But along with that, the importance of ‘letting go’ was forgotten too. Tenacity was here to stay. Only an old love would be replaced by a new one.

The marble Krishna, a foot tall, a most cherished legacy, which used to adorn the centre of the Mantapa, now stood by the side of the new Krishna.
But size does not matter. We all understand that it is the magnum opus of all art in our home. And will be as long as…

As I had walked through the market in 4th Block, a bunch of peacock feathers had caught my fancy and I had bought 20 of them for three hundred rupees. I had been looking for a cow and calf – plastic or fibre or whatever. It would look so lovely with the Krishna. I had found a small one but its eyes were not kind. Then, I had found a really good sculpture but it was huge – half my size and there was no way I could have carried it to Mysore.
That’s when my eyes had fallen on the peacock feathers and I had bought them. Most of my beautiful possessions were found when I had been focusedly searching for something else. I am sure that is true is the case of most people.
Life is what happens to you when you are busy making other plans.

Decorating the Mantapa was also peaceful and without incident. Usually there would be two opinions about what flowers to use, where and how to arrange them, where the heavy bunch of plantains would be hanged and where the coconuts, whether to use electric lights inside…
Sometime along, without realizing it, without discussing it, both I and my father had decided to let go. What mattered was our being happy and together on that day.
Living as we are in comfortable times, there is no scope for those big heroic sacrifices. But the small sacrifices make a big difference. They are the most difficult to make and their importance too, dawns upon us after so much precious time has been wasted. But better late than never.

Imprinting Krishna’s baby feet on the floor is a fascinating thing. You make a fist of one hand, dip the little finger side of the fist in a dilute paste of rice floor and press it on the floor. And then dip the tip of your forefinger in the floor and touch them five times above the feet creating the toes starting with the big toe first, so when you reach the little toe, you have used most of the floor and just a dot remains. And then after 1 hour of careful guarding, the things dry and you see Krishna’s feet entering the door and walking up to the Mantapa.

Making Rangoli peacocks on the floor with the stencil that also came from Guruvayur was fascinating too.

Regular as I am with my Suryanamaskaras, I ate without a care, all the sweets and snacks – Chakkuli, Thenkolal, Murukku, coconut burfee, seven cups and all…

Bro Murali was missing, saving up all his leave for his wedding. But the anticipation of the wedding and the joys it would bring, filled the lacuna caused by his absence.

Yet another Ashthami came. And went. 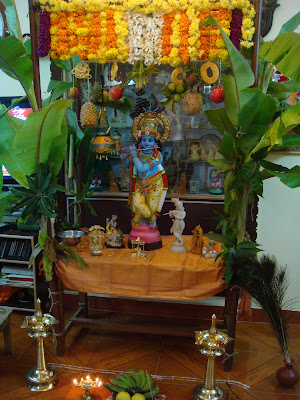 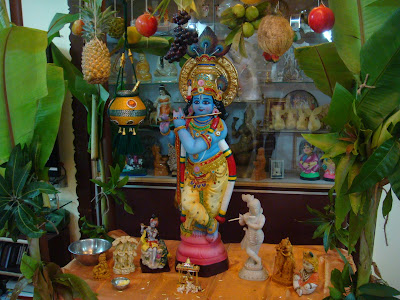 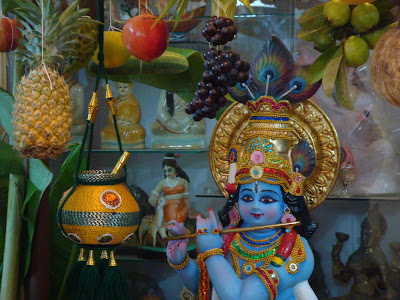 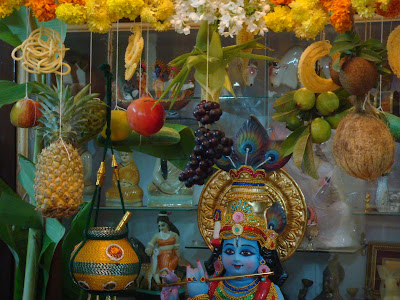 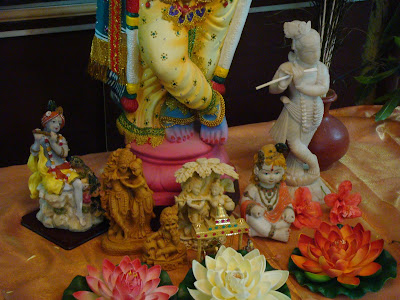 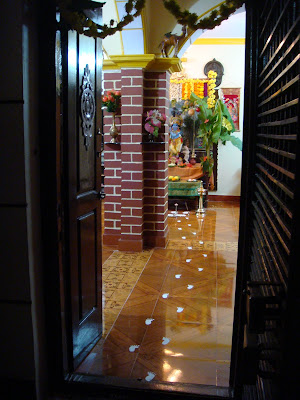 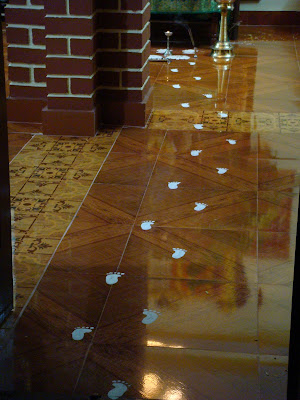 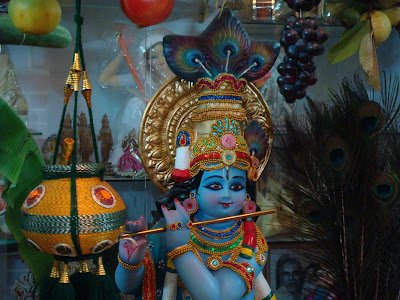 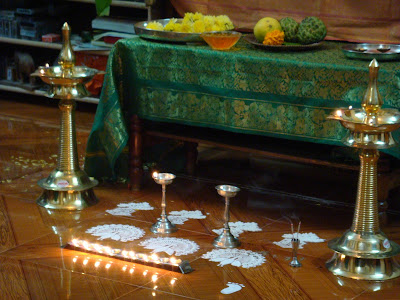 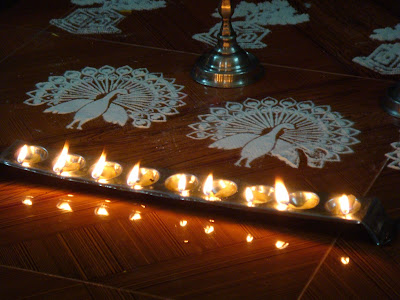 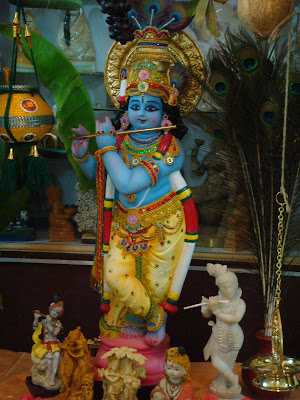 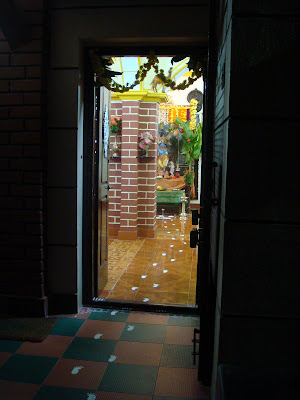 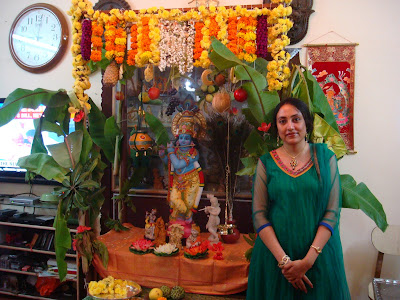 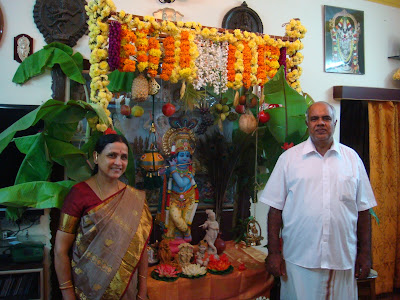 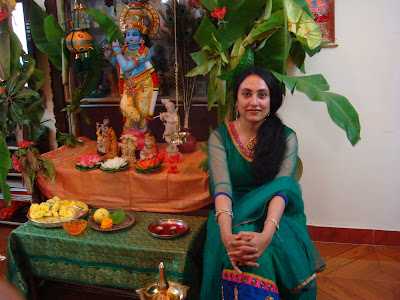 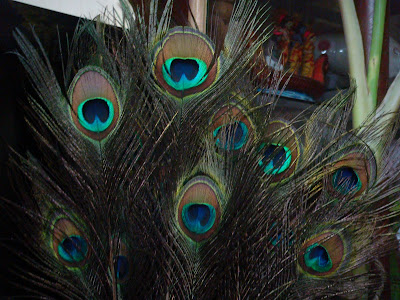 Posted by Sowmya Chakravarthy at 12:04 5 comments:


A few drops of rain fell and leaves sprouted from the dying, decaying, stunted trunk. Tender, shiny and green.
Like nothing had ever happened.
Like the axe had not fallen on it only months before.
It was a tree growing in a footpath. No one had planted it there. The territory was meant for people walking, running, ambling on their way to their duties.
The territory was not meant for trees to trespass. For it came in the way of people’s feet that were used to following a defined pattern of movement that was not to be obstructed or hindered by trees.

Actually the tree belonged there. Anywhere. And everywhere.
It was the tree’s territory that people had claimed forcefully.
But they had claimed it and it was now theirs.

When it had grown beautifully, boughs and leaves and blossom and all, the axe had fallen and all that remained was a short stump of the trunk, almost level with the ground. For a long time, it lay there, dying, rotting, blackening, becoming one with the dust.

But unseen, unmoving, deep beneath the black stump, there was a pulse of life. The last pulse.
A pulse that was like a seed that contained within it a big tree. That could grow again into the enormous giant that it once was.
One day, a few drops of water fell on the very edge of the trunk, barely touching it. The next day, you could see a few tiny, green leaves, all set to grow again. To live again.

Their innocence and courage were only pitiable. Their confidence almost ridiculous. Their tenacity exasperating.
For all knew they would never succeed. It was just a matter of weeks before someone noticed their audacity and brought the axe again.

Because tantalization is a cruel thing. To die again and again is torment.
Every life deserves one death that is final and complete. Only one.

Sometimes, love is like that tree. It grows in a forbidden territory.
Love’s territory is all the world but the guardians of society have claimed most of it, drawn neat boundaries all over it and defined well, what belongs to whom. And what territories are forbidden to whom.
And they now refuse to return it to love.
So love becomes that tree. Sometimes.
It grows in a forbidden territory.
Only to realize someday the impossibility of its aspirations and to be struck down by its own disappointment.
It drags itself to a corner to die.
Yet it holds on to a last pulse of life.
One day it finds a few drops of that wretched hope.
And grows again.
With innocence and courage. And ridiculous confidence. And exasperating tenacity.
It refuses to die.
To be struck down again. By some more disappointment.

For tantalization is a cruel thing. To die again and again is torment.
Every love that is not meant to be, deserves one death that is final and complete.

Posted by Sowmya Chakravarthy at 11:20 4 comments: