Flower Show At Lalbagh And Living In Bangalore

For the first time after many years of living in Bangalore, I went to see the flower show at Lalbagh.

The evening of 16th, it rained after I reached there and it was too crowded. I managed to take a few pictures, which is why I went again on the morning of the 17th to get a better appreciation.
Lalbagh is one place which gives every Bangalore lover some assurance and respite in the midst of the fast depleting greenery. It is one of those places that has not changed in years and mercifully so.

I managed to get there by 11 and it was not as crowded as it had been the previous evening.
A lot of hard work I must say; a cornucopia of plants, flowers and leaves not only collected but also assembled together to make a very pretty picture indeed! 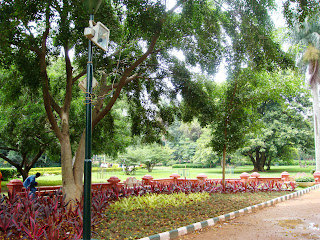 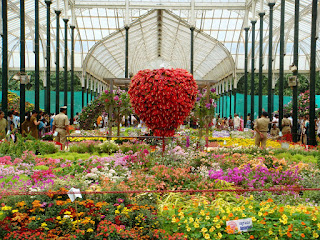 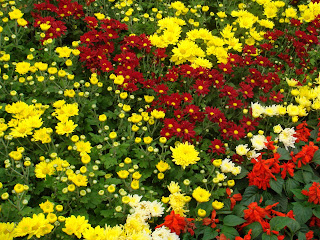 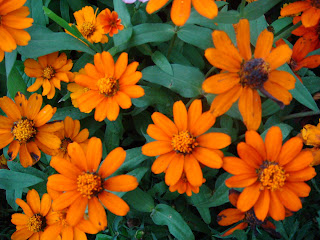 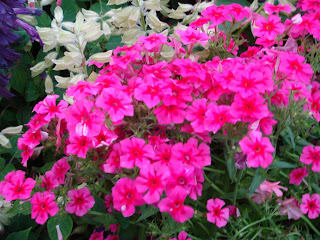 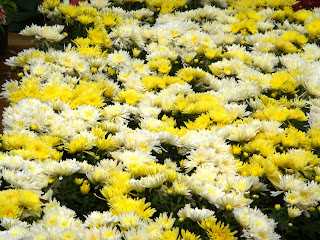 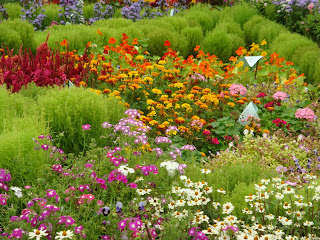 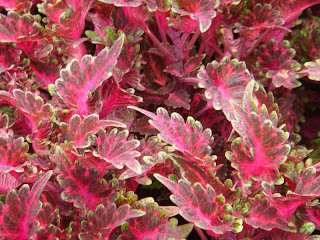 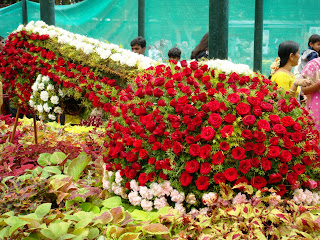 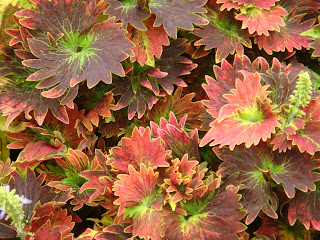 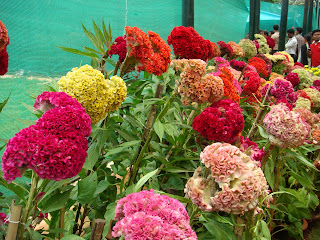 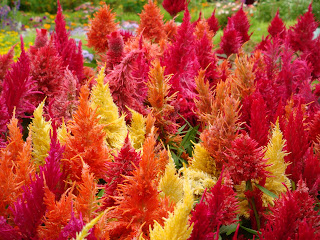 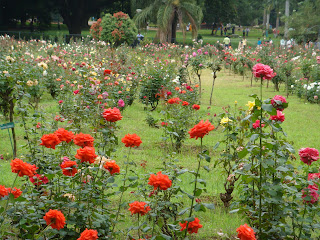 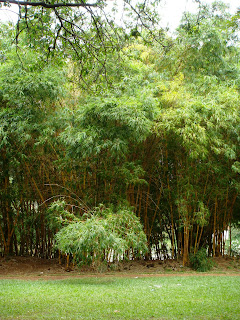 For quite some time now, the pubs and discos in Bangalore have had to endure the effect of their unfavourable planetary positions.
The regular party goers, the “happening” lot of the city seem to have lost all purpose of living. Almost everyone is declaring Bangalore a “dead city”. No night life. No parties. No DJ’s. Nothing is happening man! It’s a dead city!

What a sad definition of life these people have.

As far as I am concerned Bangalore is a very happening city, a city full of life.

Theatre is happening here more than anywhere else. Rangashankara shows a play everyday. Alliance Francaise and Chowdiah Memorial Hall are not far behind. Well, almost.
Classical concerts are happening. Sonu Nigam and other singers are performing. Jagjit Singh ghazal concerts are happening. Art exhibitions are there. The climate is the best you can get.
Lalbagh flower show is happening! This city has more lakes than any other city.
Does anyone even know of the Basavana Parise or Kadalekai Parise? No, because that happens in South Bangalore. To most of them, Bangalore is just MG and Brigade road.

So what do you mean by “Nothing is happening”?

I mean, what more can a city be expected to offer to its inhabitants?

The only thing that’s not been happening for some time is the pub that is a synonym of tobacco, alcohol, drugs, illicit sex and some nudity (well, almost! You should go to the pubs of Bangalore; over half the people are more than half naked.)

And yes, there is illicit sex. These lounge bars, pubs and discos are the epicenters of flesh trade in the city. Mingling with the normal crowd, there are prostitutes glancing here and there, hoping to find some guy letching at them.
These prostitutes would not stand behind a tree in Cubbon park and get bitten by mosquitoes all night, like those rustic ones. You see, they are English speaking prostitutes! They have some standard. So they operate out of air conditioned lounge bars and cater to English speaking rascals!

The men, all drunk, falling all over the place, lean on these women sometimes, sliding their hands under the clothes of these women, sometimes kissing them on the dance floor and what not. Quite a sight it is!

Men and women smoke in style and smoke to glory. The smoke I am sure, reaches high heaven.

If you call Bangalore a dead city because all of the above are not happening, then I pity you for your definition of life.

Going once in a way for some music and dance is one thing. But being addicted to such pastimes…. I wouldn’t call it healthy. Forget about morality and propriety. Look at it from the environment point of view. So much of fuel burnt and such poisonous gases released to the air till late night. For what purpose? Drinking beer and dancing all night?

During daytime, traffic is inevitable. People have to go to work, students to school, etc. But after sundown what is the need to continue pollution and global warming? Why shouldn’t the city rest?
Most of the time, no useful work is done, but the flames are not extinguished…

Like Tagore said “As soon as the day of sunlight is over, the day of electric light begins. There is not much work done in it, but there is no rest, for the fire continues, as it were, to smoulder in the charcoal after the blazing wood has burnt itself out…”
I wish more and more people would read Tagore…

For holding such opinions, I have been mocked at and asked if I were a Bajrang Dal or a Shiv Sena or an RSS activist! All I do is heave a sigh. I am sure Tagore is heaving a sigh too……

As for me, although an exception in this sea of party animals and compulsive shoppers, I am simply happy to indulge in a healthy pastime. Trees, flowers, leaves, common people and roasted peanuts in the peaceful, serene garden of Lalbagh……

Posted by Sowmya Chakravarthy at 21:02

I'm not sure how a handful of PAGE 3 celebrities represent bangalore. Even without the extension of the 11PM deadline, Namma Bangalore still rocks!!!!!!! And whoever thinks the only way to enjoy is to drink and dance, surely there are missing so much in life

All those protesting against the Ban of Night Life, should protest for something for Day Life also ( Bad roads, Clogged drains, Load shedding etc....)

I am happy about load shedding....
reduces unnecessary human activity... and some energy consevation... all together... it helps reduce global warming...

Alcohol is not a banned substance. It is actually very good for you, since it helps you relax and unwind, while you are still in the right side of law.

An excess of alcohol - much like an excess of ghee, of jargon, of self-esteem or of religious practice - could be bad. It's left to the individual.

Every place where people congregate also attracts vices. Probably our call centres are bigger vice dens than our pubs. And there are scores of prostitutes - my heart goes out to them - waiting on the sidewalks of MG Road.

Around the world, people recognise the need for a nightlife. It's a manifestation of today's lifestyle, good and bad. And believe me - the longer a city stays awake, the LESS the crime rate would be.

I am no big fan of pubs. I am indeed a big fan of the green turf and the butterfly and the dew-kissed sidewalk. I just happen to love my occassional drink, and am not averse to a bit of interesting company over a late night.

Call me a bad influence, or even immoral. But it's just that I believe every experience has a bit of the omnipresent in it. A yogi who smokes pot once told me so.

I too visit discos twice a year... But I dont care if the discos shut down tomorrow..

The problem is not all are responsible drinkers like you... Most of the people are proud of the fact that they can drink 10 mugs of a drink and still not get high...

You may have something called responsible drinking... but what about smoking? Every one who breathes, the two legged and the four legged, have to bear the brunt of those who smoke... as I told you, forget propriety and morality... think of it as a practical problem and you will see what I mean...

Why should acres and acres of land be wasted to grow poison when there is such a shortage of food???

You have shifted focus to another issue completely.

Anyway, your views on tobacco are laudable... it's a deplorable practice that only kills smokers and harms everyone else. But the government and the MNCs make money!

Yeah , i enjoted a lot here, i took some photos here.