After returning from Gaumukh to Gangotri, I was not very sure of my future course. I wanted to visit Kedar Tal, Dodital and also Yamunotri. After some dilemma and dilly dallying, I called up the forest officer at Uttarkashi who had issued us permit to go to Gaumukh.

He was Yogesh, a friendly boy (a kid, actually) and had shown interest in coming with us to Dodital. It was in his place that I tasted the juice of Buras, a wild flower, for the first time and it tasted so good!

So when I called up Yogesh asking him if he was still interested to come with me, he said yes at once. So I left to Uttarkashi. I spent the night with his family, in his home. I must mention here that the family, especially his mother was very nice to me.
After a hot water bath, tasty home food and good sleep, I was ready for the next destination – Dotital.
We drove to Sangamchatti from where the trek began. We were determined to cover 22 kilometers in one day.

We started by the Assi ganga river towards Agoda village through a thicket. 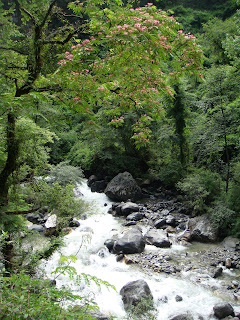 The five kilometer walk – I mean, climb – was difficult, although scenic. 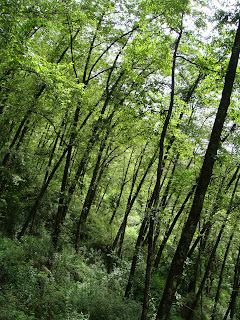 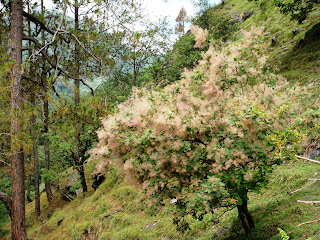 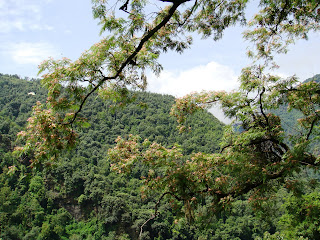 At Agoda, I realized that I needed a porter to carry my back pack which was not more than 5 kilos in weight. So we took Naresh with us. I had trekked enough during this tour to understand a few things about my capacity for adventure.

I find the first few kilometers really difficult. I pant for breath and halt often. After some distance, I feel no fatigue. I can walk continuously for several kilometers without resting and I can overtake more than half the people who are ahead of me on the trail. I feel like a machine that has been programmed to keep walking.
I am lucky to have strong limbs. I did not feel pain in the joints. My calves ached, but I ignored them.
I don’t drink too much water. If there are springs on the way, I drink from them. I don’t carry a bottle for the weight of it slows me down. So, I can go without water.
I can go without food too. In this tour however, I did carry glucose and dry fruits just in case….
One thing that I find extremely painful is walking in the Sun. Terrible!

This is Buras flower of which juice is made. It’s available only in these parts. 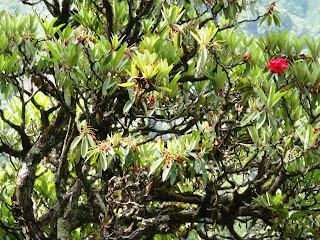 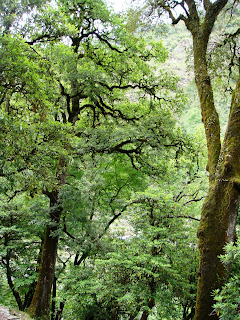 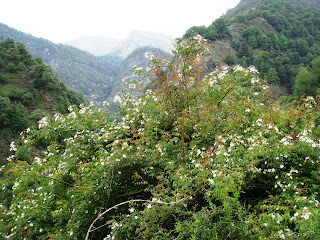 It started raining, but we continued to trek. Our twenty rupee raincoat helped to a certain extent. 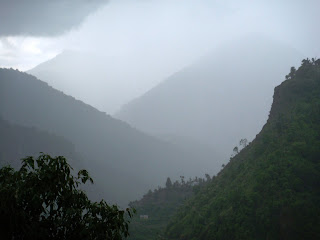 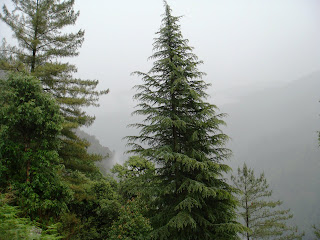 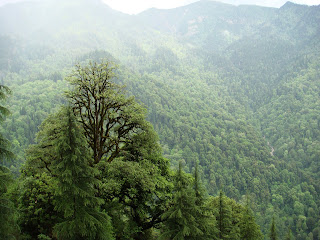 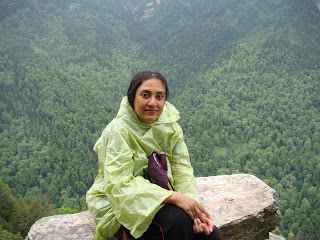 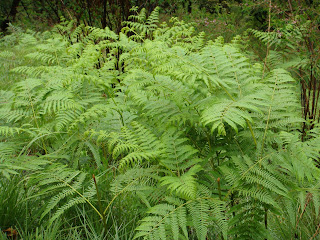 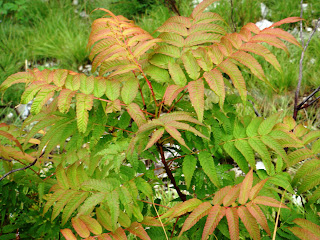 This is the Bandarpoonch peak. I have no idea why it got that name.(Bandarpoonch means monkey’s tail!) 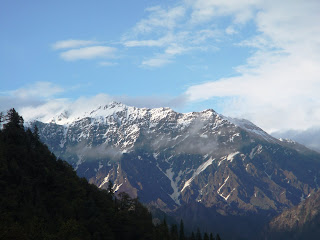 I must mention that it was 7:30 in the evening when we still had five kilometers to cover. We were equipped. We had a torch.
We trekked in the night till 10:30. This was AN EXPERIENCE!

It was twilight when we left the village of Maanjhi where we stopped for a cup of chai, where we also met a lone German woman who would reach Dodital the next day.

On one side of the trail were the mountains. On the other side was the valley full of Devdar trees. The trail itself was narrow; muddy in certain places and stony in other places. It was slippery after the rain. The fallen leaves that were decaying made the trail more slippery. The buffaloes and mules that had treaded the route left not only their foot prints ;-) but their urine and excreta as well. Sometimes, one would find a bear here and there in the vicinity of this area.
On this trail, we set out, with only a torch to guide us in the dark, to the ever elusive lake of Dodital.

If you want to know the meaning of absolute darkness, you should go to this place. Yogesh, who was carrying the torch, reluctantly switched it off now and then just to please the fancy of this stubborn girl and I stood there feeling as if I had gone blind. It was DARK.
I looked up at the sky and I saw what I had never seen before.
A clear sky packed, sprinkled, smeared, sprayed and painted with stars. I haven’t seen so many stars in all my life in one single night sky.
The drone of flowing water in the distance was like a mirage in the desert. Now, we thought we had reached the lake. Now, we thought, we had finally arrived. But we had a long way to go. 2 kilometers in a moonless night through a thicket on a dangerous trail is a long way indeed!

We had to cross many springs on our way! At some places, there were logs of wood across the springs on which we carefully balanced ourselves. In other places, we were ankle deep, knee deep in ice cold water, stepping on rocky beds as we forded the river. Our shoes and socks were soaked in cold water but I felt relieved to be washed like this after all the mule and buffalo shit and urine my feet were immersed in …...

We had almost reached when there appeared an obstacle before us and my heart sank as I believed we would have to return. There was a spring before us and the bridge had been broken down as reconstruction was to begin. We had no choice but to ford the spring on foot. This was difficult and both Naresh and Yogesh helped me.

Another place, the trail itself was broken and suddenly we found ourselves at the edge of a trail that was no more. The trail continued at a certain distance, a few feet away from us but much below. A gorge separated the two trails. We stepped on a few stones that skirted the mountain and somehow descended down. One slip and I would have gone down the valley.

We reached Dodital, sat around a chula(kitchen fire) in a dhaba and dried our socks and shoes. I would have to wait till the next morning to see what I had come all this way for! Dodital! 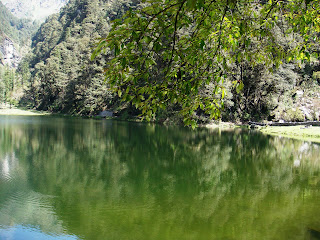 I was initially disappointed because of two reasons. The water was not blue but green. Something about blue algae and green algae and all that… Next, it was not a massive lake but a small one. I mean you could easily see the other end. It had a circumference of one kilometer. Karanji Lake in namma Mysore I much bigger.

But when I walked to the other side, I thought the lake looked beautiful. 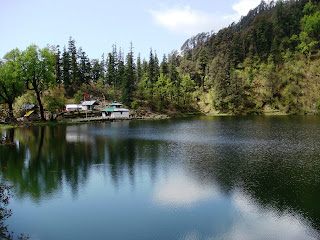 I learnt later that the lake is very deep at a certain point and no one has been able to measure its depth. Once, a boat drowned and the man’s body never floated to the surface!

The place is very serene. There are just two or three pukka buildings in that place. The temple of Annapurna is one among them. Lord Ganesha is believed to have been born here.
There is a small room for the priests behind the temple. The third building is the forest rest house. This place is not very popular unlike the other pilgrim places and there were a very few people. Needless to say, the place was clean. There were students from Doon school who had pitched their tents nearby.

When I woke up that morning, I heard the melody of flute. I looked all around to find the source of this melody. A sadhu baba, seated close to the lake was playing the flute. The soft melody filled the entire place which was otherwise still and silent. The effect of a flute is so soothing that a place already tranquil becomes more tranquil when the flute is played.

From Dodital, we went to Darva top and returned back. I will cover this in subsequent post.
Here are pictures that I took, as we returned from Dodital to Sangamchatti, after our raelly adventurous trip to Darva Top. 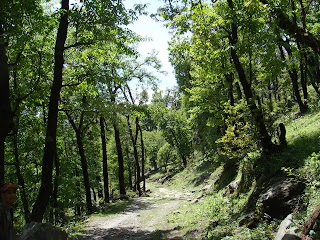 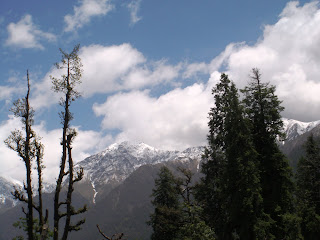 At last, after several trials, I succeeded in capturing the right colour, the right hue. 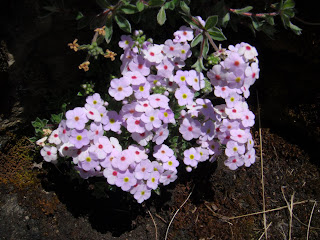 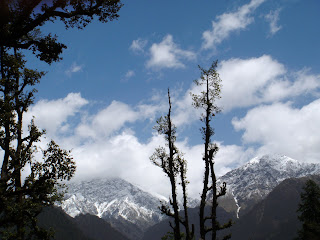 Back to Agoda village. 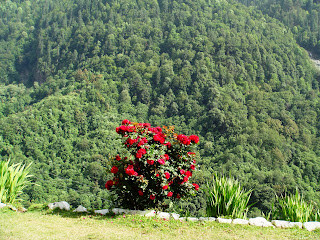 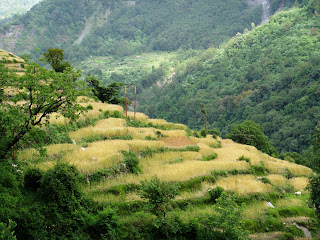 Posted by Sowmya Chakravarthy at 16:21

i really envy you.... 2 treks to himalayas within a span of few weeks... those places are really heaven on earth.

The photos are awesome and the picture of the lake would make a nice desktop wall paper......

The pictures tell all the stories which are not mentioned in the blog.... These photos are a treasure

However, i am complaining about the length of the post.I still find wanting for more :)

are only the ferns that are beautiful??:)... thought it was the way you have narrated your experience with the nature... along with the other lovely snaps..good job man! esp capturing the flute was a perfect timing to blend with the nature....
~B

Thanks. But it was a single trip, one month long... no two trips...

Hey B, nice to know you liked the flute...

I would also like to go on the Dotital trek and would like some help. Since I'lll be travelling alone, would like to contact Yogesh, if you know how to reach out to him. Also any more details on what you carried, what shoes to wear, the weather etc, would be useful.