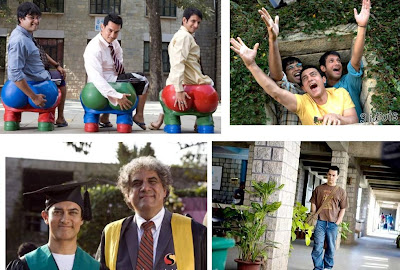 I don’t intend to do movie reviews in my blog. Not at all.
But this movie I am committing to paper because it was an experience. Like a few other movies. Salaam Namaste, Om Shanti Om, Kal Ho Na Ho, Taxi No 9211,…
Raised my existence from banality to scintillation.

Aamir. No one like him in the entire industry.

Every minute was entertaining. Filled with worth. I laughed till I fell off my chair.
Almost.
I tried hard to control my tears too in some scenes.

Every character had a definite role to play. There were no extras.

The idiosyncrasies of characters are all very well brought forth. Most noteworthy being those of the professor. The way he rides his bicycle, his 7 minute power nap - during which he gets a shave and listens to opera and sleeps, his unrelenting discipline, the student who mugs up everything, speaks Hindi in a queer accent, swallows some medicine given by a quack and breaks the wind, Kareena’s fiancee who attaches a price tag to everything including people, the paralysed father of one of our heroes pillion riding a scooty. Too much amusement and humour packed into one movie.

And that speech that was read out all wrong by this geek with a queer Hindi accent. Ah! I will burst whenever I think of that speech.

I liked the All is Swell song. The other songs were quite plain - don’t even remember them.

I am so glad they did not bring the book to life. I mean, most people have read the book by Chetan Bhagat. What fun would it be to watch a movie that was predictable?
What was all that skirmish between Aaamir and Chetan Bhagat? The movie is far far better and very different from the book.

Boman Irani, who played professor Veeru Sahasrabuddhi deserves a standing ovation. What an actor! How completely he gets into the character with no trace of his own identity. For all the comic relief that he provides, you take him seriously! Conception of such a character is commendable. Bringing the character to life deserves eulogy!

Kareena looked good for a change. (I never ever considered her good looking. The only thing she’s got is complexion). I wish someone else had played her role – Genelia may be.

For me it was all the more special because it was shot in Ladhak. I had just returned from the peacock blue waters of Pangong Lake when I read in the papers that the three idiots teams was shooting there. I was delighted to see Ladakh in the movie again - the bridge over Sindhu river, from which they make a return to Manali, to stop Kareena’s wedding, the familiar spot at Pangong Lake where we had taken a stroll… it was sooooo cold that we were wearing layers of clothes and covered our ears from the cold winds that were piercing like a hundred needles. It was difficult to breathe after all that. It hurt. I could not believe my eyes when I saw these actors so comfortable. And performing! They must have spent some time there unless it was all taken in the first shot.
These actors deserve a lot of praise for braving the hardships of such cold weather.

The last scene – the baby’s delivery – would have been gross had it been the first time in Hindi cinema – what with Aamir Khan peering into the bedsheet between the lady’s legs now and then. But it’s been shown in many movies before and viewers have got used to it.
I still think they should stop using childbirth as a means of comic relief.

Posted by Sowmya Chakravarthy at 20:40

Sowmya,
Yes this movie is too good and I understand why you made the exception of doing a movie review.

Few things from your Article, in my opinion casting including Kareena is perfect no one else could have done justice to the short role she had. Song wise Zoobie-Doobie you hear it is a modern slightly serious avataar of Ina-Mina-Dika. In my opinion that is the best songs. In fact all songs are good you need to hear it little more.

Finally I agree the Childbirth part is odd in otherwise perfect movie but then on the other hand it fits well in the story.

It is much better than the one shown in end of Salaam Namaste.

I have read most of the entries in your blog and I really liked them :)
This post is well placed and i agree COMPLETELY wid two things here :
1 Casting of Genelia instead of Kareena .. I think they chose Kareena jus because she had more brand image .
2 The child birth scene should'nt have been so explicit .. like the way u put it " stop using childbirth as a means of comic relief "
Keep writing !

Thanks Rishi for the comment. Would like to see you here in this space more often.
I agree with you. Salaam Namaste childbirth is a total misfit. does not even pretend to be relevant.

Welcome to this space. Thanks for the patience you have shown in reading many of my posts and for your nice words :)

I will check your blog too...